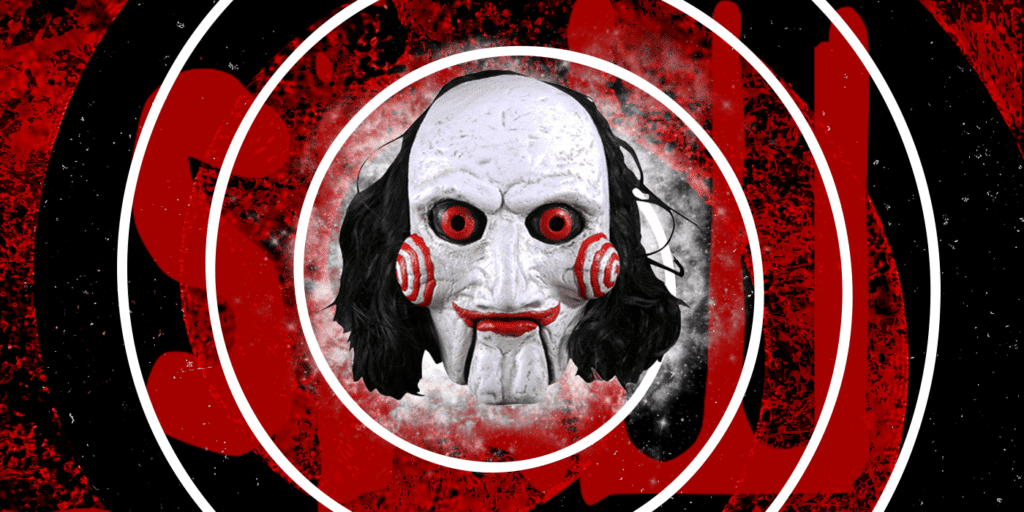 It’s hard to believe we’re now nine movies deep into the Saw franchise. We’ve gotten some great films over the years, but we’ve also gotten an incorrectly-advertised “final” film 3D gimmick, a spin-off without Tobin Bell, and a series with so many got-damn flashbacks that you might as well piece them all together and just call it a Prequel (You’re welcome, Lionsgate!). We all know they aren’t stopping at nine films either. Even if nothing new has been announced just yet. Where will things go in Saw X? Well, hopefully not into space like in Jason X, although the idea of a NASA space ship rigged with Saw traps and zero gravity is pretty tempting visual torture porn.

See? Now you’re thinking about it too, aren’t you?

The deeper into sequel waters movies go, the more reliant on gimmicks they tend to become. That means it’s eventually going to be Crossover Time! I’ve put my pitches for potential Saw Crossovers in list form below. A list you say?! On an internet site?! I know, I know. I’m original and brilliant. I even previously titled this article Saw Crossovers You Didn’t Know You Wanted until I remembered that I hate when writers do that. It’s pretentious as fuck to assume that the majority of readers already agree with you. So, I changed the title to reflect the honesty that I’m probably the only person high enough to want any of these.

I know that we won’t get any new Fridays of any kind until Jason’s dads stop fighting for full custody of him in court, but hear me out. There are certain Friday characters that I think Jigsaw would love to sink his reverse bear trap teeth into. For one? Tommy Jarvis. The guy was in and out of psych wards. Even Jason’s reported death didn’t stop poor Tommy from worrying that the pissed-off goalie was coming for him. He spent most of his life looking over his shoulder, and we know how much Jigsaw hates it when people waste the gift of life. Well, thanks to a whole bunch of pig-masked followers and some elaborate scheming by past-Tobin Bell and the apprentice of the week, on this Friday the 13th, Tommy gets to confront Jason and his demons in a final Saw trap room once and for all! Oh, and Jason can kill some other trapped people along the way too, because you can’t not have that.

A Nightmare On Elm Street

Well okay, not really. This one I imagine more as Jigsaw versus a pre-burned, pre-demonic Freddy Krueger. Jigsaw doesn’t report bad guys to the cops when he catches them misbehaving, and Freddy Krueger would be no different. Imagine an Elm Street parent whose child was killed by a combination of neglect and Human Freddy. The parent must now make up for that mistake in the eyes of Jigsaw. Or, imagine a child in control of the proverbial big red button that would decide Freddy’s fate. Perhaps the iconic knife-glove is even used as part of a trap, which is how Freddy develops a taste for it. The biggest flaw with this one would be lack of suspense, since we know Fred has to survive The Game in order to get to his own origin story. The Elm Street rights are up for grabs right now though. Anything is possible. Oh, and before you tell me in the comments that the two timelines wouldn’t match up correctly, I remind you that Jigsaw has flashback super powers. He’s alive and Jigsaw’ing whenever the story needs him to be, dammit!

As of this writing, Netflix is about to clean up the TCM timeline Halloween 2018 style, so you can pretty much do whatever you want with Leatherface and his inbred family now. Real talk? They’re also running out of Texas Chainsaw movie titles to use. We’ve had just Texas Chainsaw. We’ve had Texas Chainsaw Massacre both with and without the preceding The. Pretty soon they’ll have to call it Another Texas Chainsaw Massacre, which sounds like what a film critic groans while rolling their eyes. Just calling it Saw Massacre with emphasis on the Saw sounds dope to me. There’s a couple other reasons I want to see this fight though. Jigsaw’s a smart guy, but as I learned with my ex-girlfriend, you can’t defeat crazy. The Sawyers have plenty of crazy with which to survive a Game. Losing a limb just means leftovers for dinner to them. I’d also feel bad for the other people in the Game for once. Imagine playing by The Rules of Jigsaw and surviving, but here come the cannibal hillbillies with weapons. Talk about nightmare fuel.

Fuck it! Batman has already practically met everyone who ever lived. Sherlock Holmes. Predator. Scooby Doo (three times!). Marvel characters. Teenage Mutant Ninja Turtles. Judge Dredd. Why not let The World’s Greatest Detective try to bat-gadget his way out of a Saw trap too? Gnab some other DC characters while you’re at it. Batman doesn’t kill (that’s the generally accepted narrative at least), but Jigsaw wouldn’t want to give him that choice anymore, citing
everyone who was killed all because Batman didn’t want to put down one psycho clown. The human chess game between Batman and John Kramer would be amazing to see as well. I’d feel dumber than I already do after watching them outsmart each other for ninety minutes, but it would be worth it for the kick-ass final product.

Both are Lionsgate franchise films, so there’s that. The Leprechaun is greedy and wasted his lifechasing gold and hurting others along the way, so there’s your in for Jigsaw to care. Throw in some expendable, gold-stealing, trapped human characters and we’ve got us a movie! Besides, you can’t tell me that you don’t want to see what Saw traps designed specifically for a Little Person would look like. On the other hand, the Lep is all magical and shit. I admit that part would feel a bit weird on the Saw side and probably make the series finally jump the shark if it hasn’t already. In fact? Pretty much any of these ideas could kill the Saw series faster than my dad killing my hopes and dreams.

Did you like this fanfiction-y pitch? Tell me your own Saw dream match and/or why I’m literally Satan in the comments. Have a Happy Halloween Horror Month, WWAM Fam! Don Bishop is a freelance writer. Previous credits include 411Mania.com, Wrestling Superstars Magazine, and Penthouse Forum (JK on that last one!). He can be reached at [email protected]