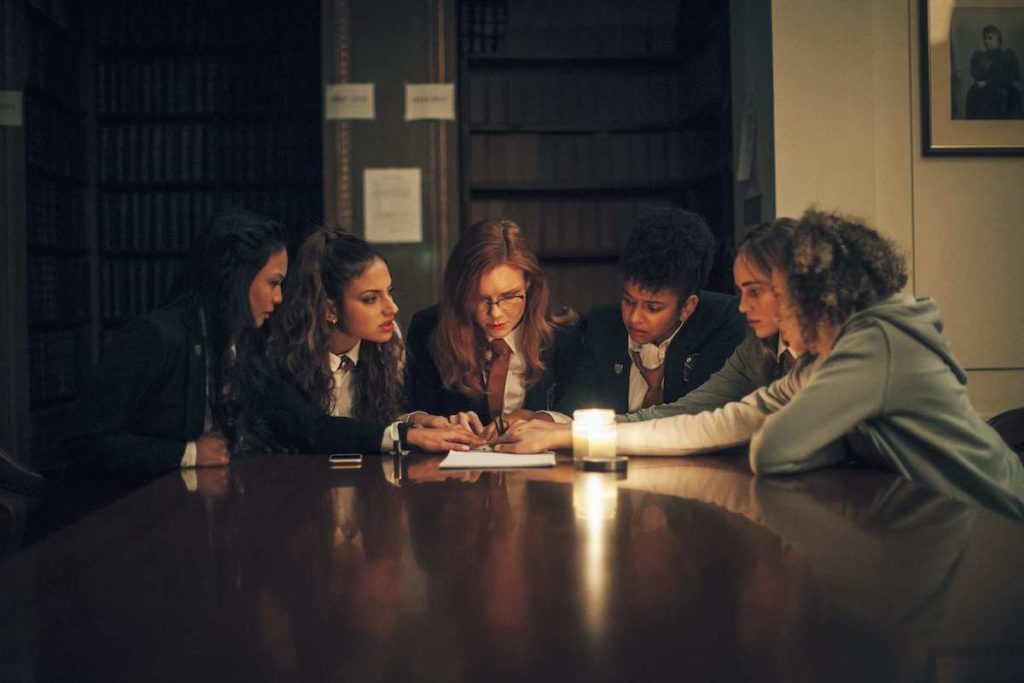 Written by: Simon Barrett (You’re Next, The Guest)

Starring: Suki Waterhouse (The Bad Batch), Madisen Beaty (Once Upon A Time in Hollywood), Ella-Rae Smith (The Stranger)

Plot: At a fancy all girls High School, a group of girls attempt to summon the spirit of a former student who died under mysterious circumstances.

There are movies you really want to like and for myself, Séance was one of them. Simon Barrett has written multiple promising horror films and most of us would agree The Guest was an criminally underrated, kick ass flick. Cue a big fat “Ben Affleck was the bomb in Phantoms, yo. BONG!” horror-fan high five to anyone who agrees.

I wish we could say the same for Séance, I really do. But you can’t win them all…and that’s okay!

The film starts off with a bunch of mean girls playing pranks at an uppity all girls school. The lack of bite in the opening scare gag was reminiscent of something from a darker version of the Goosebumps TV Series. Which, isn’t all that bad of a thing if that’s what you’re going for.

I thought “Okay, we’re going for a young adult theme here”. The rest of the film dispels that theory however, when heads are being ripped off by bookshelves and other moments of gore revealed themselves. Some were fun but all of them looked cheap and felt alarmingly out of place.

As we power through the film, not a lot happens and we’re stuck watching the girl drama play out uninspired between these miserable ass teenagers. Multiple sequences show the high schoolers are smoking pot and popping Xanax and what’s new? Except for the fact that they are reacting so slow and speaking so quietly that it actually feels like they’re all chill stoned and you’re the only sober person at the saddest party of all time. These characters were in the midst of a possible ghost from beyond the dead (and or human) picking them off one by one and yet carried the urgency of an Ambien induced turtle.

Séance seems like it’s aiming to mix a Scream type whodunnit slasher with a Conjuring film that has indie flavoring. Which, is a cool idea! Is this a serial killer or a ghost? You are at the very least invested in finding out who is completing these boring murders about characters you couldn’t possibly care about but when all is finally revealed? It’s just as flat as everything else. Not to mention completely unrealistic and full of plot holes. I’m not sure what happened here but Séance is a total mess from start to finish.

3.5/10 Thanks for reading our Seance Movie Review! For more please subscribe to the email newsletter below!